So, I have divided my favorite books into five categories : best debuts, best adults, best self-published, best sequels and favorites. I have written little introduction to each categories :D

The books that are in this category were a first try at publishing a young adult for an author. It was their first baby. Their test. And they did their best. And these two stand out for the creativity, greatness, and enjoyfulness (I know... not a word!).

These books are hot, sexy, and some scenes are so well described that they make you blush. They keep you blushing while you turn the pages again and again, unable to stop. And these two books were just...

Sometimes self-published books can suck. But other times, they should be published by a real publishing house that will get them sales up to their potential. These following books have that capacity. They are great.

Do you know the Sequel Syndrome? It's when you loved the first book, but the sequel sucked. Well, those books didn't have that STUPID syndrome. They were great, and sometimes even BETTER than the first book!

The favorites were, obviously, great. They had anything and everything I would want in a book. They were just AWESOME. 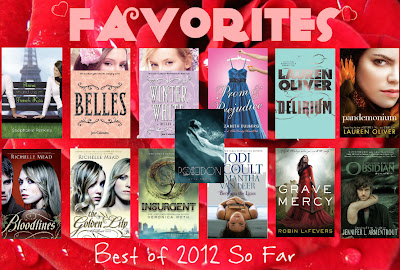 Anna and the French Kiss by Stephanie Perkins
Belles by Jen Calonita
Winter White by Jen Calonita
Prom and Prejudice by Elizabeth Eulberg
Delirium by Lauren Oliver
Pandemonium by Lauren Oliver
Of Poseidon by Anna Banks
Bloodlines by Richelle Mead
The Golden Lily by Richelle Mead
Insurgent by Veronica Roth
Between the Lines by Jodi Picoult
Grave Mercy by Robin LaFevers
Obsidian by Jennifer L. Armentrout


So, what are some of YOUR favorites so far?
Posted by Forever Lost in Books at 7:14 a.m.