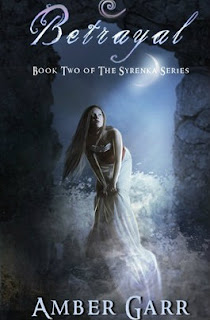 
Sometimes life as a mermaid can be suffocating

Betrayal picks up not too long after Promises left off. But now, Eviana is co-leader of her clan with Kain, her parents are dead, and Brendan has left her. Talk about change! And, with the war against Lucian getting harder and bloodier, Eviana and Kain has to figure out a way to convince the Coucil about not accepting Lucian's offers. But, what if betrayal, love, and family gets in the way?

Betrayal is filled with juicy drama you don't want to miss!

Amber Garr's writing is fast-paced and is really entertaining, although some times the book didn't have enough action in it for me.

I think it would a little too far of a stretch to say that I can relate to Eviana, because :
1) I still have my parents
2) I have never been in love
3) I haven't ran away from any guy
4) I don't have a mean sister- or any sister at all
5) I'm not a mermaid clan leader that's in war (although, I wish I was a mermaid)
So, relating to characters is something high on my list of 'What Makes a Great Book' (which, isn't really a list), BUT, I have to say I did like her as a character even though I can't relate to her.

Of course, before starting the book, I knew that someone would betray her (because of the title), and so I was searching for who might. And, I wasn't really surprised that it was that person :D

You definitely want to add the Syrenka series to your to-read list!


I also really like the covers in this series!

Other book(s) in the series (if in a series):

Amber Garr spends her days conducting scientific experiments and wondering if her next door neighbor is secretly a vampire. Born in Pennsylvania, she lives in Florida with her husband and their furry kids. Her childhood imaginary friend was a witch, Halloween is sacred, and she is certain that she has a supernatural sense of smell. She writes both adult and young adult urban fantasies and when not obsessing over the unknown, she can be found dancing, reading, or enjoying a good movie.
Come by tomorrow for a giveaway of the two books in the series!