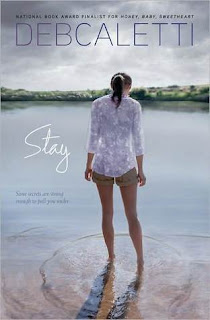 Click for the Summary
Title : Stay
Series : -
Pages: 313
Author : Deb Caletti
Publisher : Simon Pulse
Format: Hardcover
Source : Library
My (High!) Opinion : Stay started really slowly for me. I couldn't get into it, and I kind of hated that each  chapters, it was either in the summer or with jealous Christian. I didn't really like that, because sometimes we'd get into a good part of the jealous Christian story, then you'd go back to the summer, and the punch would be like, cut in two.
Also, I really didn't like the little * or ** at the bottom of pages; I thought the author could have just put it in the real text, not that way. It was only confusing sometimes, and sometimes you didn't need to know that, or it was just something stupid to write.
This book was about a pretty touchy subject. I know my mom doesn't want me to have a jealous boyfriend, because they are dangerous. Of course, I don't have a boyfriend, and I'm not planning to. Anyways, I felt really bad for Clara, since her boyfriend was a really jealous type. And he seemed really dangerous, even if nothing too bad happened to her. I felt like this was a bit like books from Sarah Dessen.
I liked the plot, it was really good. But I don't think it had enough drama... Something could have happened to Clara, more than almost downing, something more... severe.
I liked the characters well enough, even though I really didn't like the way the author made them swear. The title could have almost been 'Fuck you, shit'. Her father swore so much, and I was like Um... her father? Really? He's not sixteen! I thought it was purely annoying. I thought Christian was really sweet at first, but afterwards, I hated the idea of even naming someone Christian. And Finn was just cute and nice and charming during the whole book, and I really appreciated him.
The writing was hard to get into; I kept stopping and putting the book down, and I couldn't get into. I just got into it in the middle, where things started getting more dramatic. The writing's quality was okay-ish, but nothing special.
The cover is really beautiful in its own way, and it represents well the book, since the book is set near a beach.... and well, there's a beach on the cover.
So, okay, I always feel bad about rating a book low because I didn't love it. I feel like I need to give it a 3.5 rating then, so that's what I'll be giving this book, even though it could be only 3.
3.5/5 stars
Tweet