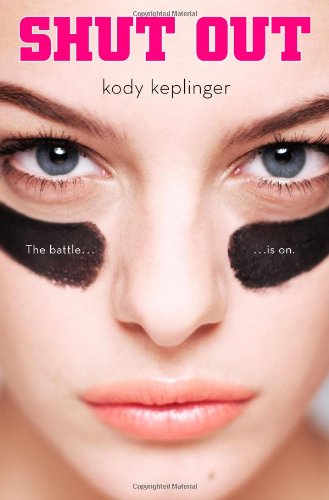 My (High!) Opinion : Shut Out was the kind of book that is for girls and boys, and that anyone could learn something about. In its own way, it is a masterpiece, because of what it tells us; do not manipulate anyone, and be nice to everyone.

The plot (or baseline, or story) was really creative! It's actually a modern retelling of the Greek play called The Lysistrata It had all I want in a good story: a great plot, creative writing, awesome and well-developed characters! It was so special in its own way, that when I first read the
summary, I crossed my fingers (and my toes, arms and legs for good luck) and went to see if I could get it at the library for free (because you know, books cost $money$). I seriously squealed when I saw I could get it!

If I was in the story, I think I'd be with one of the guys from the hockey team :D I don't really like football, I think hockey is better!

What's difficult for an author who writes stand-alone books is probably putting enough in a book some people readers won't be hungry for more, or won't request a sequel or a series for the book. I understand that, but I feel like she could maybe do another story with a kind-of-the-same-theme. Am I right? (Of course I am!)

The characters were the 'hot' topic in the book. I really really really really hated Lissa's first boyfriend, Randy. He was a real jerk, dumbass, macho (call it whatever you like, he was STUPID!). I hated him! But I am so happy that *eep spoiler!!* she finally is with Cash, he sounds hot! *the spoiler is finished :D*.

The cover is cool! It kind of represents the whole idea of the book ; girls should stand up for one another. Don't you think?

Kody Keplinger is definitely a great author of Contemporary YA Fiction.